ACTIONS BY THE TALUM GROUP AGAINST THE CORONAVIRUS

Talum is one of the companies that are crucial to the functioning of the country, therefore our activity must be organised in a way so that it runs smoothly. In doing so, health and safety of the employees is key priority! In this endeavour, we follow the recommendations of competent state institutions for labour organisation to help reduce the rate of spread of coronavirus. We have established a handling protocol in case of a potentially recorded suspected coronavirus in the industrial zone.

In the Talum Group, we are convinced that we will be able to cope with the demanding situation with responsibility to ourselves and to others and unconditional compliance with the at all levels! We would like to thank everyone for the understanding and participating in this exceptional situation. 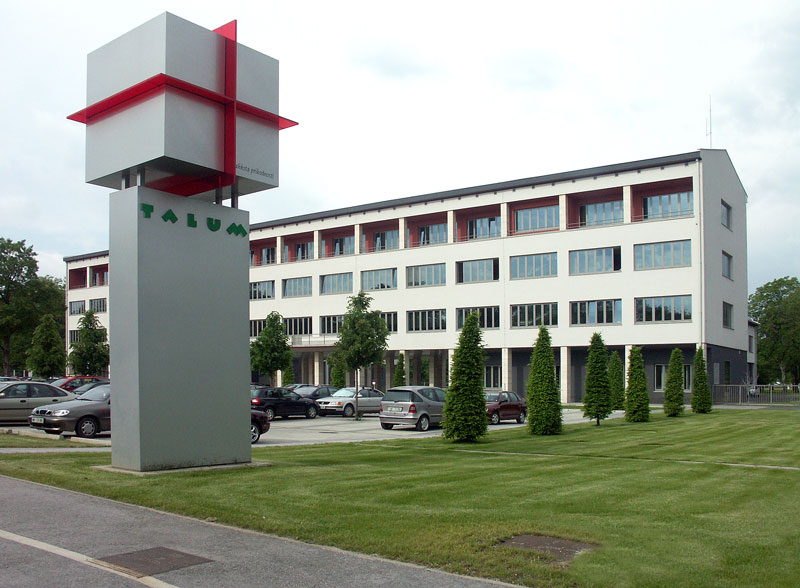 Group Talum is exhibiting at EUROGUSS – Europe's largest trade fair for die casting. We are looking forward to meet you in Hall 8, exhibition booth 8-520. 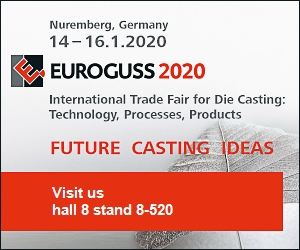 VISIT US AT THE GIFA – INTERNATIONAL FOUNDRY TRADE FAIR

Group Talum is exhibiting at GIFA - world's leading trade fair for casting technology. We are looking forward to meet you in Hall 13, exhibition booth C35.

WE PRESENT HEATRAPLATES - "WE TAKE THE HEAT OFF"

A wide range of our aluminium heat exchangers today manufactured with the roll-bond technology , will now be recognized under the new brand HEATRAPLATES which we have registered recently. We will present the new HEATRAPLATES brand on the upcoming fair The Battery Show Europe taking place on May 7-9 in Stuttgart. We are looking forward to meet you at our booth no. 766.

VISIT US AT ALUMINIUM 2018 TRADE FAIR

Group Talum is exhibiting at Aluminium trade fair in Düsseldorf, Germany from 9th to 11th October. It si one of the world's leading aluminium industriy trade fairs that covers entire chain from raw materials to semi-finished and finished aluminium products. Focus topics of Aluminium 2018 are e-mobility, sustainability, digital manufacturing and lightweight tehnologies. Trade fair takes place in six halls, that cover an area of 80,000 square maters, hosts more than thousand exhibitors from all over the world and is expected to attract more than 27.500 visitors. Visit us at Aluminium 2018 and get to know Talum as a Producer of foundry alloys, billets, slugs and discs, castings and roll bond heat exchangers and as a provder of service and engineering solutions. Visit us in hall 10 at booth 10E113!

THANK YOU TO THE BATTERY SHOW VISITORS

The Battery Show 2018 in Hanover has ended. In Talum's subsidiary Talum Izparilniki d.o.o. they are satisfied with the attendance at their booth as they have established many promising business contacts. They are ready for new projects with existing and new business partners, thanking everyone that visited them at the fair and showed interest in their products and innovative solutions. 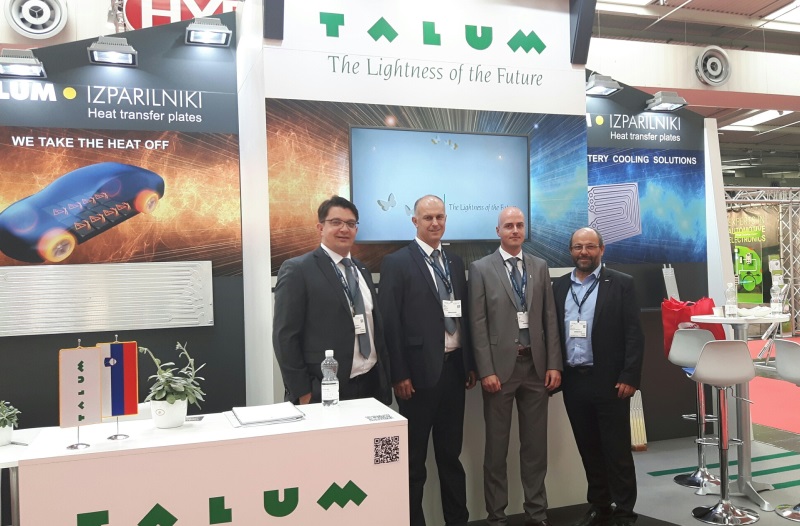 We are pleased to invite all our valuable partners to the The Battery Show 2018, co-located with Electric & Hybrid Vehicle Technology Expo, which is Europe’s largest trade fair for advanced battery and H/EV technology.
Taking place from 15 - 17 May 2018, in Hannover, Germany, it will host more than 300 manufacturers and service providers from across the supply chain, who will display thousands of design, production and manufacturing solutions, including battery systems, materials, components, testing and recycling, for industries including automotive, utilities, renewable energy, grid, power tools and electronics. Find out more here.
At the booth B470,we will present our efficient cooling solutions for EV battery packs with a Roll-Bond heat transfer plate. We will be pleased to explain you all the details.
For free pass to the exhibition and for the organization of the meeting with us at our stand, please contact us at: franjo.skuber@talum.si .
Running parallel to the exhibition, the three-track conference delves into the most prominent industry talking points – from the next frontier in vehicle electrification to optimising battery efficiency and performance through energy recovery and electric turbocharging.
We very much look forward to seeing you this May in Hannover! 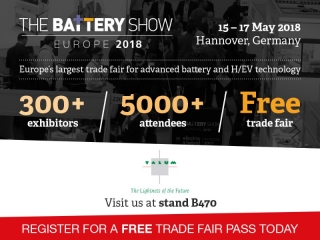 Visit us at Euroguss 2018 international trade fair for die casting in Nuremberg, Germany, which will be held from 16 to 18 January. Talum is located in Hall 7A at stand 7A-513. 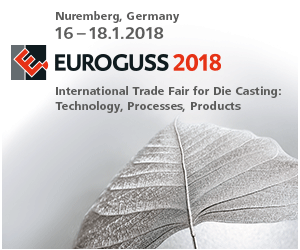 TALUM d.d., business unit Aluminium, organized and hosted the 13th AP18 Club meeting between 6th and 9th June. Members of the club are aluminium smelters from all around the world that use the AP 18 technology for production of primary aluminium, developed by Aluminium Pechiney. Representatives of various companies from Australia, Canada, France, Norway, Scotland, Argentina and India presented latest findings in their professional field and shared experiences during the conference which took place in hotel Primus in Ptuj. Our guests also took tour of production of aluminium, castings, slugs and discs and foundry alloys and visited Talum Inštitut d.o.o. They also had opportunites for sightseeing the Podravje region of Slovenia in the afternoons. 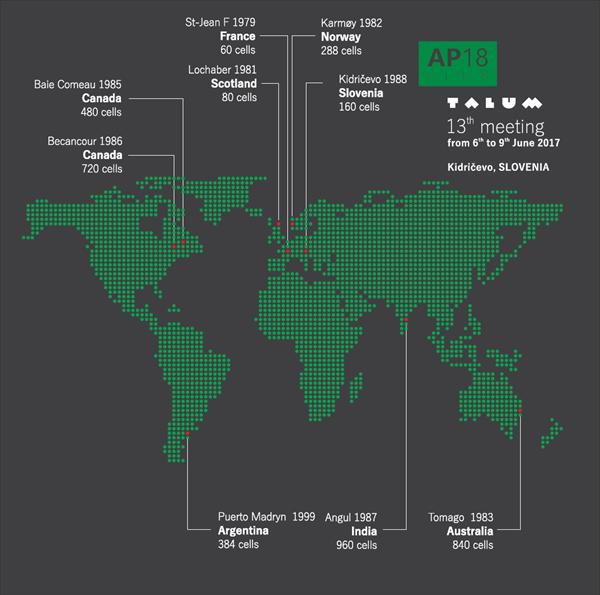 This year Talum celebrates its 62nd Factory Celebration that, among everything else, marks also the 20th anniversary of the fall of the clapped-out factory chimney. The three-day event will begin on Thursday, the 17th November, at 10 o’clock a.m., when we organise the meeting with the retired co-workers in a big hall of a restaurant Pan.

On Friday, the 18th November, at 1 o’clock p.m., a joint ceremonial session will take place. The Talum’s Management Board, the directors of subsidiary companies and business units, heads of the services, members of the Works Council, members of the Employees Council and members of the Syndicate Conference Kidričevo, will attend this event.

In a lobby of the administrative building, you will have an opportunity to see an exhibition of fine art works of an artist Dušan Fišer. In the big hall of the restaurant Pan, socialising of the employees of the group Talum will begin at 3.30 p.m. The socialising will be introduced by the ceremony of the highest awards given to the employees for their achievements – Zlati metulj (Golden Butterfly).

On Saturday, the 19th November, we will conclude our Factory Celebration with a traditional doors open day. To everyone, who wants to see the production in our halls and to meet all its variety, we open the factory, which actually represents a small town. Before the tours, we will gather at 9 o’clock in front of the administrative building. The guided tours will begin after a chairperson of the board Mr. Marko Drobnič gives an introductory speech. 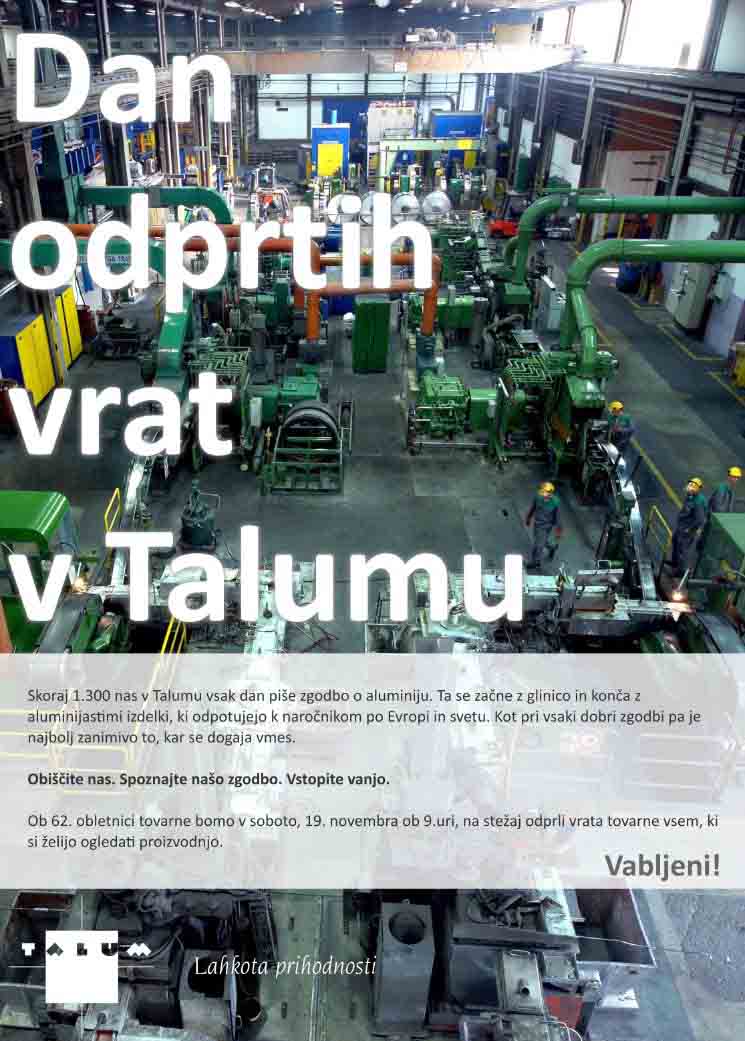 THE BEST COMPANY OF THE PODRAVJE REGION IN THE YEAR 2015

Yesterday at 7 o’clock p.m., the first ceremony of giving a title The Best Company of the year of the Podravje Region took place in Narodni dom in Maribor. It was organised by The Styrian Chamber of Commerce and a newspaper Večer. A ceremonial guest of honour was dr. Miro Cerar, Prime Minister of the Republic of Slovenia. The premier praised economy progress of the recent years in the Podravje Region and appealed successful companies to be the role models for others. Neisha, a Slovene singer, spiced up the event with her music inserts.

A member of the management board of Talum d.d., Mr. Daniel Lačen, attended the event in the name of Talum. According to a selection of the expert commission, the group Talum was ranked on the third place in a category The Best Company of the Podravje Region. Such a high placement is a praising achievement since the competition in the category of big companies was very fierce. We understand it as recognition that we can keep up with the best and as stimulation to be even better. 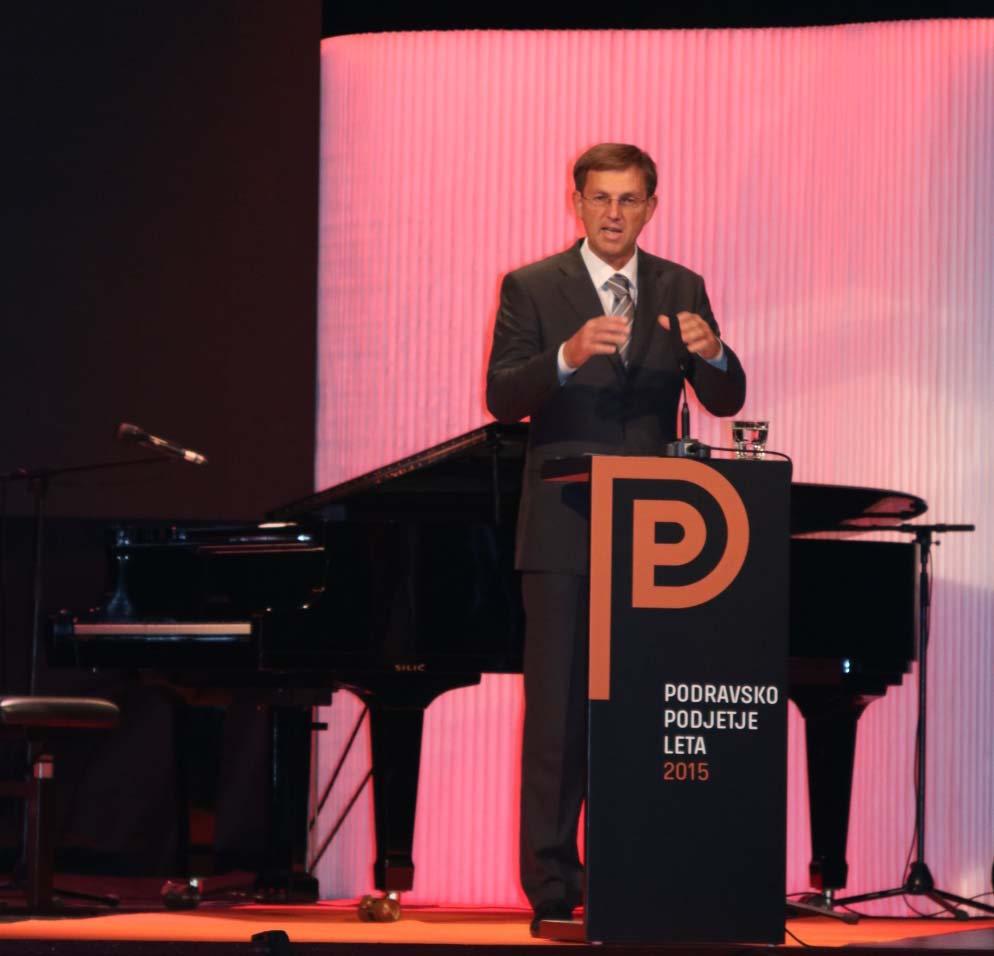 THE FIFTH DAY OF INNOVATION

Systematic motivation for innovations is one of the key strategic directions of the group Talum on which we build our future. Mr. Marko Drobnič, a chairperson of the board managemen tof Talum has written, “If we just follow the others and copy them, we can achieve merely a level of the original. We can become really the best only by introducing our own, innovative solutions.”

Work in this field – from developing an idea to planning its realisation – runs constantly, and once per year we present our endeavours to others. On Wednesday, 21st September 2016, in a big hall of the restaurant Pan, already the fifth traditional Day of Innovation took place. At this event, we presented and awarded achievements in the field of innovation of the previous year. We awarded three innovators from the field of massive innovative activity of employees, 46 of them for a professional innovative activity and five within a contest I Dare, which this time ran under a slogan Efficient at the working place.

Better ideas break in situations when different aspects and ways of thinking are interlaced. Therefore, as it is already our habit, we invited an interesting guest to this event. This year our interlocutor was dr. Jožica Rejec, a chairperson of the managemen tboard of the company Domel. A top-notch saxophone player Oto Vrhovnik diversified the Day of Innovation with his music inserts. 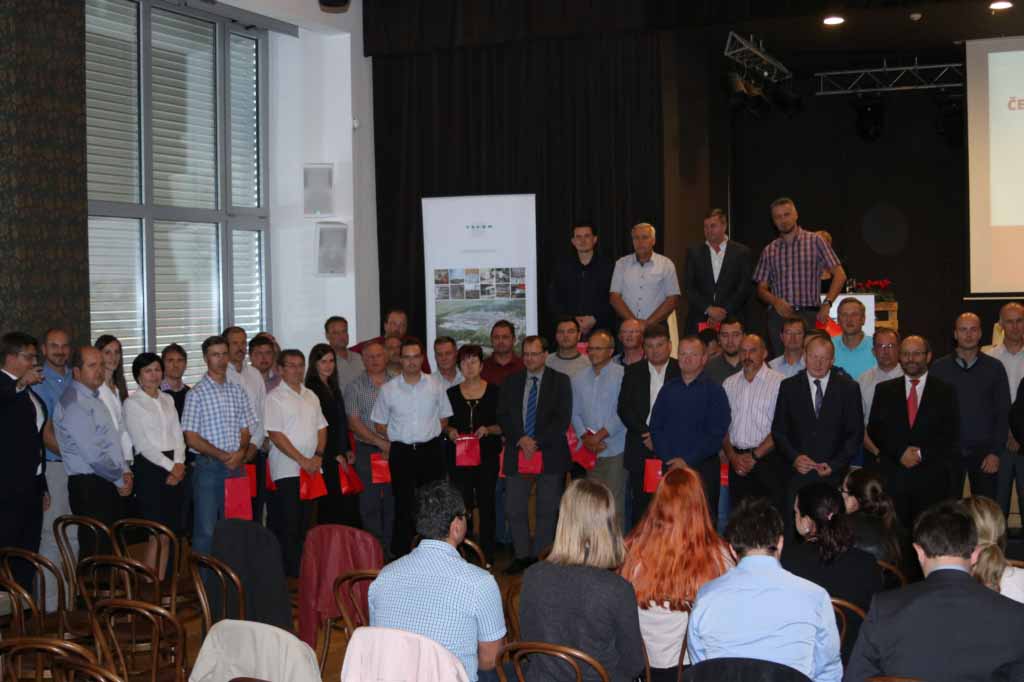 The shareholders appointed an audit firm DELOITTE REVIZIJA d.o.o. from Ljubljana as the auditor for accounting reports of the current business year.

Three shareholders, holders of 94,63% of total capital of the company, attended the today’s meeting of the assembly.

The Management Board of the company Talum d.d.

THE AGENDA AMENDMENT OF THE ASSEMBLY PROPOSED BY A SHAREHOLDER

We are announcing the agenda amendment of the assembly proposed by the shareholder Eles, d.o.o.:

A CALL OF THE ASSEMBLY MEETING OF TALUM d.d. KIDRIČEVO

On the basis of the Article 295 of the Companies Act, and in accordance with the Article 39 of the Statute of TALUM d.d. Kidričevo, Tovarniška cesta 10, Kidričevo, The Management Board

c a l l s
the assembly meeting of TALUM d.d. Kidričevo
on a day 4th August 2016, beginning at 12 o’clock at the registered seat of the company in Kidričevo, Tovarniška cesta 10,

with the following proposed agenda of the meeting:

Opening the assembly and realising quorum.
Election of the assembly bodies and confirming the agenda of the meeting.
An agreement proposal:
»The following are elected:
- Ivan MALEŠIČ as a chairperson of the assembly,
- Slavko Škerget and Ivan Ogrinc as counters of votes.

Appointing an auditor
An agreement proposal:
»An audit firm DELOITTE REVIZIJA d.o.o., Dunajska cesta 165, 1000 Ljubljana is appointed as the auditor for accounting reports of TALUM d.d. Kidričevo and its subsidiary companies for the business year 2016.«
Only those shareholders (only these may vote) may attend the meeting assembly, who are on the cut-off date, i.e. 31st July 2016, registered as shareholders in a share register of the company, which is run at the central register of dematerialised security (KDD d.d. Ljubljana); and those shareholders who confirmed their attendance at the assembly meeting in a written form by the end of the stated day the latest.

The company will pass the reports, proposals and corresponding explanations to the shareholders within 3 days from the day of receiving the shareholder’s requirement for passing them.

In accordance with the Article 305 of the Companies Act, the shareholders at the assembly meeting may require from the Management Board of the company the data, which is needed for estimation of individual items of the agenda.

TALUM d.d. Kidričevo
The Management Board

The Management Board of the company TALUM Tovarna aluminija d.d. Kidričevo, Tovarniška cesta 10, Kidričevo, is announcing an entry of increase in share capital based on the Article 341 of the Companies Act.